Business security in outdoor areas used to consist of junkyard dogs.  Using today’s technology, business owners can have peace of mind that their property will be secure and bring the pups inside.

The area to be secured will be monitored by trained professionals when armed.  No unauthorized personnel should be in the secured area when the system is armed.  It is recommended that these devices be placed in an area where “No Trespassing” signs are posted as a warning.    Second, because these systems provide visual verification of an active burglary in progress, they also minimize false alarms and increase police response time.

Here are three ways to protect your outdoor property:

A motion viewer is a wireless viewing device triggered by an internal motion detector.  This system can be totally operated on battery power and communicate on cell service. When motion is detected, the device sends a ten second clip to the central station operator to allow them to distinguish what caused the alarm. If the alarm is caused by an inanimate object, like foliage, or animals, the operator can disregard and reset the system.  The primary function is to show a burglary in progress so law enforcement will give it priority.  They are not cameras and cannot record and replay footage.  Only the clip is visible to the operators.  They have a built-in tilt sensor to trigger a tamper alarm in case of unauthorized manipulation or change of orientation.  For a more secure system, these devices utilize 900Mhz radio to communicate, similar to law enforcement radios.  To maximize battery power, these devices should be pointed away from landscaping, roads, and movement that may occur from inanimate objects or inclement weather.

Applications – Due to their versatility, this system is great for construction sites and areas that have minimal power and ever-changing areas that require security.

Did you know that cameras can be added to enhance a business security system and provide outdoor security coverage?  Certain cameras have onboard analytics to provide motion activation.  Similar to the motion viewers, cameras can alert a live operator who can view on an alarm.  Details can be shared with responding law enforcement before they arrive on scene.  Unlike the motion viewers, operators can view the live camera footage until the situation is under control.  If a camera is removed during the burglary, the recorded footage will be available on the recording device up until the device was removed.  If the recording device is removed, the recorded alarm footage will still be available to the owner from the central station.  Recorded video that is time stamped and can be used in a court of law.  Each camera needs 110 power.  If cameras are mounted away from the building, a wireless bridge is necessary.  Pull cords have been a know source of false alarms.  Tying the camera system into the alarm system will allow the operator to see the pull cord and either notify police on a burglary in progress or inform the owner of a possible false alarm.  The owner can them make the decision to send law enforcement or reset the system.

Applications – Fleet parking, lumber yards, fenced areas that are to be secured after hours. 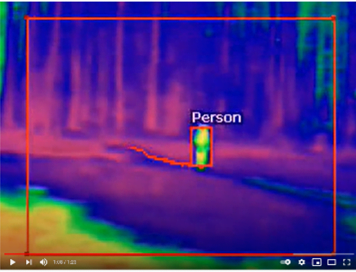 Thermal imagers allow you to see where you could never see before.  Using high contrast thermal imaging, these devices provide verification and detection when attached to an alarm system.  Images are not affected by changes in lighting, low contrast scenes, or inclement weather, and no illumination is required.  These are not cameras.  Images will be grainy and only show a temperature signature.  When attached to a security system so operators can confirm a burglary in progress.  Imagers can also be dual purposed to monitor temperature on generators or near fuel tanks.  Place them on a camera system or use them as a stand-alone device.  110 power and internet or cell communication is required.

If you are interested in a new business security system or enhancing the one you currently use, please contact us.

Hurricane Tips for your alarm system

Nickel and dimed on your business security?

View All
Scroll to Top